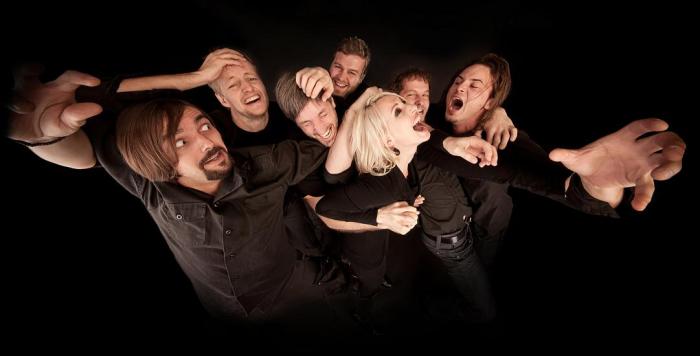 As much as music delights, surprises and fuels our lives it can frustrate just as it has with metalers Kontrust.  Frustrate in the fact they have somehow managed to evade our attention here until now. Deeply eclectic, wonderfully eccentric, and extremely brilliant, the Austrian sextet unveils their new album Second Hand Wonderland to set the predominately lacklustre world of rock music on a collision course with inspired ingenuity. The album is amazingly impressive, perfectly unpredictable, and most of all complete fun.

Kontrust are classed as a crossover band though that term can be applied to the majority of bands these days, the new breed openly taking influences and missing multiple genres in to their sounds. Kontrust just do it better and from the widest palette available to create sounds that light up every thought, sense and part of the body. They are an infection there is no cure for, a contagion that one only wants to be consumed by. So how can we describe them for others still not aware? For this album take a healthy chunk of Skindred/Dub War and boil it up with chunks of Djerv, spices of Rammstein, Mike Patton, and Guano Apes and then pipe some Yello, 12 Stone Toddler and Shaggy through it and you are on the right recipe at least.

two singles The Smash Song and the Dutch chart hitting Bomba. In between that and this third release (their debut album Welcome Home coming in 2006) the band received an Amadeus Austrian Music Award in the Hard & Heavy category as well as playing numerous shows and events including the Przystanek Woodstock festival in front of a reported 300,000. Now with the new album one can only see and hope that they hit the largest and widest attention, music needs the likes of Kontrust, the world needs them.

From the moment the album opens and charms it flies like a wild exhilarating wind across the senses, the songs though not particularly brief simply breeze past with the most open of pleasure and fun. They say time flies when one is enjoying oneself and Second Hand Wonderland is the strongest proof. Led by the brilliant dual and contrasting vocals of Stefan and Agata who is Polish, the songs sizzle and stomp with each and every note. With music that rages and bruises through to hypnotising and serenading to sirenesque effect and brought by the rest of the band in guitarist Robert, bassist Gregor, drummer Roman, and percussionist Manuel, the album is a sonic festival that wraps its manic arms around the body whilst drizzling mouth watering invention and bedlam into every pore.

The first single from the album Sock ‘n’ Doll opens the unforgettable experience with initial vocal melodies from Agata before Stefan brings his best Benji Webbe impression.  Within a few eager breaths the track erupts with a deep predatory bass and crushing riffs led forth by thumping rhythms. From a Skindred/Djerv rampage the song suddenly steps aside into a beautiful melodic pop moment from the stunning voice of Agata backed with crystalline melodies. Glittering electro sounds then sweep over with an industrial nip to them and in a little over a minute we have been turned inside out magnificently. The song ripples and pulsates to its end continuing the interchanges and already the incisive hooks of the band are in and attached deeply especially from the explosive metal/ska lead into the climactic end. 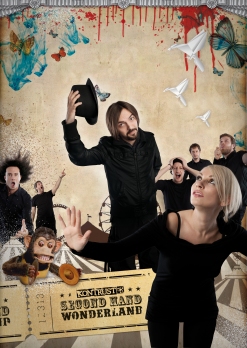 Every song could be mentioned in immense detail but to save a review running into pages let us just say each and every song is as inspiring and majestic as they are wonderfully crafted and delivered. The likes of Falling with an metallic Animal Alpha like infusion, the De Staat toned electro pop addiction that is Monkey Boy, and the energised rap/melodic grooved U Say What simply leave one grinning from ear to ear whilst the magic engages fully. If you have not begun joining in by the fourth song a check of the pulse is needed.

The peaks of what is a constant elevated high include the songs The Butterfly Effect, Bad Betrayer, Raise Me Up…… ok basically everything. The Butterfly Effect is a definite highlight and a song that Bow Wow Wow might be making if the band was starting out now, its tribal instinctive rhythms and flow awash with warm and gracefully beckoning vocals from Agata. The wicked sinister stomp of Rasputin and the punk thrusting Adrenaline showing Agata can be as harsh vocally as stunning, not to forget the aggressive maelstrom of intensity Hey DJ! leave one just as desperate to dive back into their depths as those songs mentioned and those left for your investigation.

Second Hand Wonderland released on Napalm Records (yes a surprise here too but they know great music) is easily one of if not the best album heard so far this year. It is magnificence at its most impressive and sets up Kontrust to be your new favourite band.