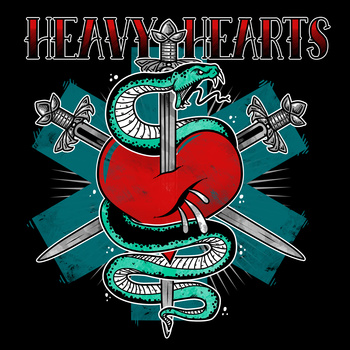 Lenny Thomas (Sorry & The Sinatras/ex-Trashlight Vision drummer) found himself hospitalised due to a serious foot injury earlier in the year with serious complications arising due to his pre-existing diabetes. Though on the road to recovery thankfully, rising medical bills and the possibility that he may not be able to work for the foreseeable future if not worse have made life very difficult.

Thomas has made a multitude of friends in music and life and they have come together and through contacting further friends in the music community to create this benefit album to help him and raise money for the charity.

The compilation will feature songs from the likes of The Wildhearts, Michael Monroe, Piggy D (Rob Zombie), Steve Conte & the Crazy Truth, Eureka Machines, Sorry & The Sinatras, The Loyalties, and Supercharger and many more with many of the artists donating rare or previously unreleased tracks.

For more information and to get the compilation from April 6th go to http://heavyheartsbenefit.com/

1.The Wildhearts :City Overture.  The original version can be found on The Wildhearts 2007 self titled release.http://www.thewildhearts.com | http://www.gingerandfriends.com

2. Piggy D : 1975
Piggy D. The bassist for Rob Zombie has a mouth. And it is a big one! http://www.blackvictorystore.com

5. Eureka Machines –: The Bigger They Are The Harder They Fall
The Eureka Machines latest album Champion The Underdog was described by SPIN magazine as ‘ the sweet spot between 10cc and Green Day’. This track is taken from the Everyone Loves You EP.  http://www.eurekamachines.com/

6. Role Models: Cherry Dear
The ROLE MODELS are a power pop 4 piece based in London. This is off their 12″ vinyl FUCK YOU SEE YOU AT THE TALENT SHOW  that was released by Taken by Surprise (Germany). A new album is in the works as well as a solo EP by frontman Rich Rags (who apparently is quite handsome). Role Models on Facebook

7. Smoker & The Rollers : Cut Me Off
Smoker and the Rollers from Philadelphia play raw, ready and rough rock ‘n’ roll. The three piece line up  are Jay Smoker (bass and vox), Micheal Danger Dunn (drums and vox), and Ryan Moll (guitar).  Check out their debut self-titled release on ITunes and their follow up release in the Summer 2012. http://www.myspace.com/smokerandtherollers

9. Darlings Of Chelsea : Raise This Flag
Darlings of Chelsea are the amalgamation of Canada’s seediest, most guttural rock/punk masterminds. Culled from legendary mainstays including The Black Halos, Kill Cheerleader, Robin Black, Scratching Post, and more, Darlings of Chelsea are a new chapter in the book of Canadian rock n’ roll. http://www.darlingsofchelsea.net

12. Michael Monroe : Got Blood
Finnish rock’n’roll legend Michael Monroe capped off an amazing 2011 by bagging Classic Rock Magazine Album Of The year award for Sensory Overdrive, from which this track is taken. Still touring the world in support of the album, expect even bigger things from Michael in 2012!http://www.michaelmonroe.com

13. Billy Liar : Is It Me?
Billy Liar is an acoustic folk punk singer from Scotland. He has been touring the UK and Europe relentlessly for the last five years, leading him to be described as ‘the town centre wordsmith and backstreet philosopher…who has played more venues than anyone else of his generation – something most of his peers can only gawp at!’ Billy’s latest EP, It Starts Here, was produced by Acey Slade (Murderdolls/Amen/Trashlight Vision/Joan Jett). http://www.billyliarmusic.com

15. Crazy Arm :Tribes/Animals
Crazy Arm set up camp in mid-2006. Not easy to categorise, and all the better for it, their sound is an accumulation of decades of influence and inspiration: rooted in hardcore/punk, 60s protest folk/country and classic rock n roll, combined with a grass-roots political overview that embraces anti-war, anti-fascist and pro-community activism. Tribes/Animals is taken from the 2011 album Union City Breath released by Xtra Mile, published by Bomber Music Ltd. http://crazyarm.bandcamp.com/

16. Obsessive Compulsive : Virago
Dreams Of Death and The Death Of Dreams is one of the most exciting rock albums to emerge from the UK in a long, long time. It’s time to get obsessed – Dom Lawson http://www.obsessivecompulsiveband.com/

18. Supercharger : Hold It Down
‘upercharger hail from Newcastle Upon Tyne, England and feature ex members of Scottish heavyweights The Almighty and Geordie Punk-Poppers Whatever in their lineup. Their sound is a strong cocktail of big fat riffs, catchy melodies and addictive choruses which refuse to exit your head long after the last listen http://www.supercharger666.com

19. Thousand Watt Stare : Lights Out
Members of Dee Dee Ramone’s band and Unwritten Law team up for this heavy hitter. Their debut album Silver Dimes is out now.http://thousandwattstare.com/

20. Von Hertzen Brothers : 21st Century Schizoid Man
Von Hertzen Brothers had a massive year with their Stars Aligned album shooting to the top of the charts and going gold in their native Finland. They’ve generously donated their take on King Crimson’s classic for this compilation. http://www.vonhertzenbrothers.com