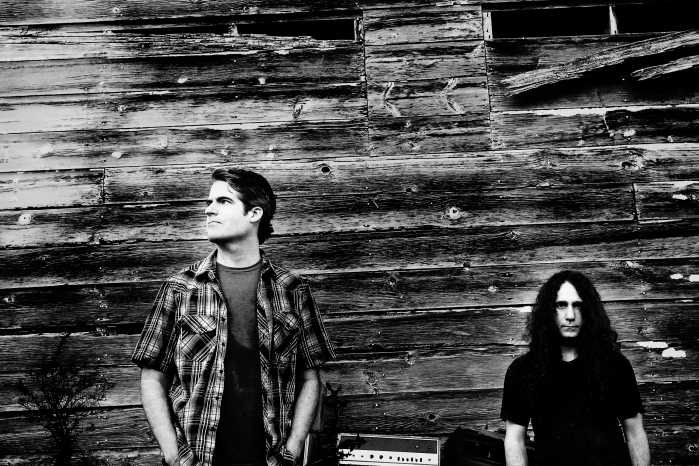 Returning with their fourth release the impressive project OSI of duo Jim Matheos (Fates Warning, Arch/Matheos) and Kevin Moore (Chroma Key, former Dream Theater keyboardist), have produced an album that eagerly sweeps one up within its inspired arms. Fire Make Thunder is a wonderful series of soundscapes made up of distinctly expressive and varied ingenuity that treats the senses to adventures offering calm caresses right through to high energy escapades. Thoughtful and beautifully crafted the release without making startlingly new declarations of barrier cracking enterprise is a gracefully enveloping and emotionally energising series of compositions from two of the most creative musicians and song writers in progressive rock and metal.

Formed in 2002 OSI is a musical relationship between the two members that produces fine creative music from long distance. Fire Make Thunder itself written and recorded individually by Matheos and Moore in their respective studios with ideas and the songs being sent back and forth. The album also features the returning band session drummer Gavin Harrison of Porcupine Tree who brought his contributions to the release, including co-writing one track, from his personal studio too. The album was created throughout 2011 with final mixing completed alongside engineer Matt Sepanic at Sound Farm Studio and Recording Environment and mastering handled by renowned engineer Roger Siebel. It is hard to imagine the difficulties of recording apart but as with their previous releases, Fire Make Thunder shows no sign of it being a problem, the album a seamless and perfectly flowing musical lake for the ear and senses to immerse deeply within.

Released via Metal Blade Records the album starts with its best two songs in ‘Cold Call’ and ‘Guards’. The opener starts

with a sampled news report which comes in throughout the track from an EBS news report in the 70’s where reports of a nuclear attack were announced before finding out it was a false alarm. With the industrial toned consuming sounds surrounding it and the starkness and chilled ambience that builds the beginning plays like an aural version of the movie Right At Your Door. Though this was not the intention of OSI and the sample used just because it sounded good, this ominous feel is a powerful wave. Eventually it explodes into forceful riffs and intense power though throughout the song retains a restraint and glowing beauty within this bulging heavier sound, the smooth distinct vocals of Moore as expressive and gently persuasive as the melodies surrounding him. The pair has an intelligent use and touch with intense sounds and flowing ambience, merging them perfectly with neither threatening to overpower the other.

‘Guards’ has an electro feel throbbing within its walls, a pulsating vein that resonates between the striking guitars, hypnotic rhythms, and mesmeric vocals. The meaty riffs swagger with a confident attitude whilst the electronic spots and tender touches bedazzle like a sonic kaleidoscope throughout the song’s boastful dance with the ear. Both these songs are OSI at their height and instantly pull one into the album allowing the following songs to be more adventurous and intimate if less accessible from the off. With music that is progressive rock, metal, and simply pure rock ‘n’ roll fused into a stunning maelstrom of atmosphere and sound, Fire Make Thunder is never less than engaging and for the whole totally infectious.

Though as stated the album starts with its best songs the remaining tracks are no less impressive or satisfying. From the ambient warmth of ‘Indian Curse’ and the excellent robust metal instrumental ‘Enemy Prayer’ through to the electronic driven industrial toned strength of ‘Big Chief II’, sounding Nine Inch Nails/Deftones like and the majestic crystal radiance of ‘Invisible Men’, the album is a fully enveloping masterpiece.

Fire Make Thunder is a real and thoroughly fulfilling joy. It is unassuming yet at the same time seeks and fills every corner of the senses with stirring and pleasing sounds.  OSO have set a marker for not only progressive metal but many genres with their new album, time will tell if anyone is up to the challenge.