In the midst of some extremely high quality and high intensity releases so far this year the new album from rock band Absolace is a refreshing and stirring side step. A cultured impassioned album, Fractals works its way deep within senses with an emotive mix of boisterous riffs, melancholic atmospheres, and melodies that court thoughts and the heart equally. The band has created a thoughtful album that plays with its listeners own thoughts, the inspiring energies and emotions as well as ideas within the lyrical content provocative and deeply satisfying.

Absolace are a quartet from the United Arab Emirates who since 2008 have shown a craft and accomplished musicianship that defies anything but acclaim. Their debut album Resolve[d] in 2010 brought them to the attention of media and fans across the Middle East but not yet to the level they deserve elsewhere. Fractals should correct that, the release a defined progression and more mature  album to their first that sets the band as one of the more exciting and impressive bands around. The Dubai foursome of vocalist Nadim Jamal, guitarist Jack Skinner, bassist Ben Harris, and drummer Greg Cargopoulos have opened for the likes of Anathema and 30 Seconds to Mars as well as making appearances at festivals like the Peace One Day Live Festival and the Formula 1 Festival in Abu Dhabi. With a sound that recalls the likes of Tool, Karnivool, Porcupine Tree, and Sunna, their music has a beauty and grace that sweeps one up inside. It is fair to say it does not rile up the emotions to excitable levels of say a August Burns Red or Beneath The Buried And Me but instead Absolace work with a more tender and personal connection to its recipient, each song and piece of sound, certainly on Fractals, a deeply touching and satisfying experience to immerse within.

The opening Sirens is an impactful example of what Absolace is all about. The song offers punchy rhythms, 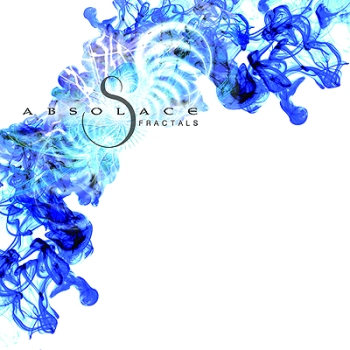 testosterone lined riffs, and a bass line on a formidable prowl that veins the track wonderfully, whilst continually well crafted melodies and passions envelope the ear and beyond, the full sound searching the depths of heart and mind. Beautifully crafted and elegantly delivered the song is just the forerunner of nine more equally majestic songs.

The likes of The Rise, Wade 2.0, and The Fall all enrapture with a haunting majesty and stunning beauty, the first of the three a textured tapestry to fall wholly involved with whilst the third is a dynamic song that glides from peaceful glory through to a more muscular stirring, a near raucous treat to recharge the energies within. There is not a moment where the album does not light up the senses, the band masterful and immense whether stirring up the pulse rate with defined urgent rhythms and athletic eager riffs or captivating with soul filling melodies and atmospheric ambient laced class.

If there can be highlights in an album that is one whole highlight it is the wonderful I Am, So I Will a song with chunky riffs, growling guitars and an irresistibility catchy groove, and the outstanding Chroma Mera, a song that takes one through many avenues, all mesmeric and all revelling in beauty. The songs, as is the whole of Fractals, are infectious. Not in the usual instantaneous way but through a continual creative wash that immerses one in to delightful and ingeniously imaginative sounds.

Fractals is as mentioned just beautiful, there is no better word for its powerful and deeply impressive invention. Mixed  by Josh William at JFW Music and Sound, the album is an essential listen for anyone who appreciates well crafted and heart inspired music. Absolace may not have been on the radar of many before now but Fractals will soon change that, the album the evidence that the band and rock music has just gone up many levels.