With an album imminent German industrial metalers Cold Rush have made a mightily firm case for great anticipation and impatience for the forthcoming release with their new maxi single Disclosing The Vicious Seeds. Varied, stirring, and infectious the two track single shows the returning band has evolved their sound into a harder and more addictive proposition which invites, entraps, and exhilarates the ear and beyond for a deep satisfaction.

Disclosing The Vicious Seeds is a fore taste for the new album AmoKKoma, the follow-up to debut The Illness of 2009. The years have seen Cold Rush sharing stages with the likes of Megadeth, Last Instance, Mono Inc., Debauchery, Equlibrium, and Suidakra across Germany and the band riling up Europe with a tour alongside Kreator, their sounds finding an easy fit to metal, rock, and industrial hearts. The two years since their first album has seen the sound of the Munich band as previously mentioned, expand into a more eagerly catchy and powerful beast, maybe inspired by the addition of new vocalist Matthias Kupka (Suidakra and Emergency Gate), who brings a fiercer and darker crunch to the vocals and energy. Their sound is grounded in the industrial bands from the nineties, addictive and challenging with a steely intent to provoke and melodically corrupt, the new single the first result. 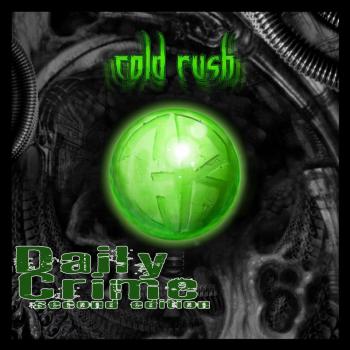 grind behind a sampled vocal. Intriguing from the off it soon breaks out into a wave of smothering density and metal forcefulness tempered with warm and compulsive melodies. The vocals of Kupka are harsh and intimidating backed up by sounds from guitarists K.L. and Wutzl that are incisive, and rhythms from bassist Ramirez and drummer Flo which steal away the breath with their dark command. The spreading electro synths sweep through and over every sense with the song overall a piece which carries an ominous atmospheric darkness.

Second song White Z is a fuller rock/metal track bringing a mix of the likes of Rammstein in league with Scum Of The Earth. The track stomps across the senses with a might and intensity that raises pulse rates and draws air punching fists. The bass of Ramirez growls and prowls the song wonderfully adding spite to an already formidable energy and attack from the guitars and the muscular vocals of Kupka.  The new aggressive yet contagious element to their sound has brought something new out of the band that is impressive, their craft at bringing their electro and melodic skills into a seamless meld with the harder intensity very rewarding for the ear.

Disclosing The Vicious Seeds is an excellent forerunner to the new full length release currently being completed by Cold Rush and if there is one complaint it is that this single has now made the wait for their album  even more impatient.