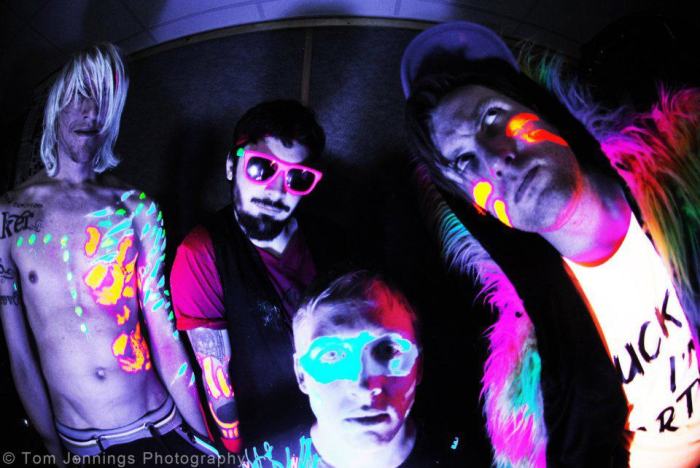 Axis Mundi is a band which has you smirking, open mouthed, scratching your head, and wondering what just hit you. Most of all the quartet from Hinckley, UK have you rocking like a bird on an electrified fence, vibrating, busting moves, and a shell shocked wreck by the end of the experience. Becoming well renowned for their live shows their debut album Chapel Perilous is the impressive result of the transfer of their live energy and mischief to the studio. The album romps all over the senses and pumps up the ear with eight vibrant violations headed up by an opening Disclaimer to cover their wicked little hearts.

Formed in late 2008 Axis Mundi have excited, enthralled, and surprised every step of the way. The year after starting, the band was rated as one of the top upcoming bands in the UK from a group of over 12,000 other strong candidates and they left venues like Indigo2 in London a hollow reflection of themselves with their riotous shows as their stock grew. 2010 saw them working closely with best-selling science author and New Scientist writer Michael Brooks during his election campaign against Hinckley and Bosworth MP David Tredinnick, the politics of the band striking a stance as strong as their irrepressible sounds, and there was the little matter of a 4 track EP Find the Others making waves too. Since its release in the twilight weeks of last year Chapel Perilous has thrust the band into brighter headlights as more fall under its stomping presence and unpredictable manipulations.

perception’ hits the senses with unbridled mischief from the off, the Axis Mundi freakish blend of unrelenting acid house build ups and ear slamming rock riffs and vocals clashing in an irresistible cacophony of sonic blaze. Classed as psychedelic raverock the band tease and mislead the senses whilst mistreating and molesting them at the same time. They come at you from every direction with the misdirection of maniacal hysterical magicians, the ensuing maelstrom of sound across the album an unsettling pleasure and sheer fun. Imagine a cauldron of Pop Will Eat Itself, Manic Street Preachers, and Rage Against The Machine flushed through a vat of The Browning and infected with a healthy dose of acid house mayhem and you have Axis Mundi.

Goat Boy opens up the chaos, its provocative riffs stroking the ear roughly as guitarist/vocalist Gary Frewin sets the stage for the rampage ahead. His voice plays like a cross between James Dean Bradfield and Zack de la Rocha and adds a perfect edge to the all enveloping sounds surrounding him. As bassist James Midgley thumps in pulse energising riffs the synths swarm and slap with a loving hand. The song is infectious and heart pumping stuff closely matched by the following eager to engage Rich And Famous. With scrambling riffs and dazzling bubbling waves of synth lapping the ear the song reaches deep with a less frenetic intrusion than its predecessor.

Chapel Perilous has a strength across its length which many bands would yearn for but with two tracks the band out shine even themselves. First there is the romping stomp of Tales from the Galapagos, an early Faith No More flavoured feast of energy and siren spawn sounds. It sways and teases with a cocksure confidence that you cannot resist its charms as it investigates and ventures up and down varied rock and electro avenues. Alongside the opener it is the best song on the album, one of a trio as the pair are joined by Eden Alive! in jostling and flaring up the heart. With soft expressive vocals and thought invoking guitar and synth melodies the song immediately captivates, then when it explodes into full on electro bedlam with a chest beating fist pumping energised aggression it spawns sonic rapture. Like a mini rock opera the song encapsulates everything you need to know about Axis Mundi and their fine imagination and ingenuity.

With further great songs like The Limitations Of Thinking Things Are Real with a stroll and attitude as mischievous as a gang of drunk school boys, the metal fuelled The Fool, and the schizophrenic Blue Cunt, Axis Mundi have produced an album that attacks and lights up every pore with fast flowing and mesmeric invention. First time you listen you grin, the second you find the glories within, and the third you are infected for life, enjoy!