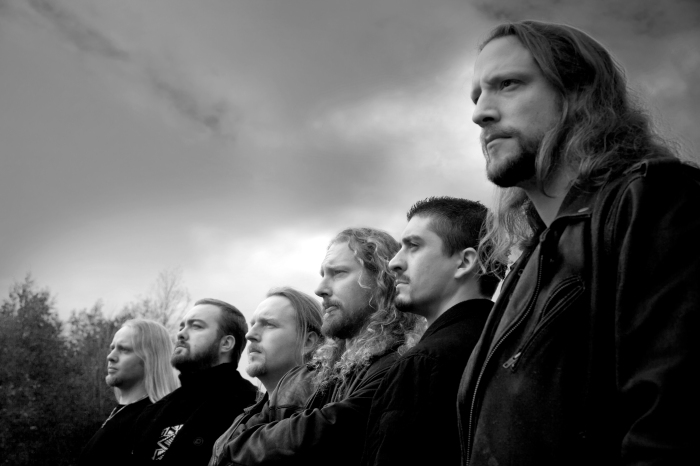 With strong chest beating and red hot blood rushing through its veins the new album from Dutch folk metalers Heidevolk is a stirring and thoroughly pleasing release. With a firmer aggression and intensity then on previous releases, Batavi the fourth album from the band is an expressive force which excites and deeply satisfies. Even with the limitation for many in the fact the band sing in their home tongue the energetic intent and craft within the emotive sound and voice immerses one into the turbulence and theme that fuels the release easily.

Batavi transports the listener to a time of violent unrest as Germanic tribes waged war against the Roman Empire along the banks of the Rhine for domination of Northwest Europe. Alliances, intrigue, and betrayal were rife as the Batavians, the protagonists of the new album from Heidevolk, found themselves stuck in the middle of the conflict. Through their own brand of traditional pagan metal the Dutch band bring forth the struggle and fight of the time and people to great effect with songs that are as catchy as they are striking, and as proud as they are forceful.

Formed in 2002 in Arnhem, the band did not take long to draw acclaim and a strong following through their mesmeric intense live shows and releases. From their debut album of 2005 De strijdlust is geboren, coming after the demo Het Gelders Volkslied the year before; through to albums Walhalla Wacht and Uit oude grond of 2008 and 2010 respectively, Heidevolk with their defined sound of thundering riffs, folk veined melodies, mountainous rhythms and triumphant clean vocals explore their chosen genre to pulse racing effect. With Batavi they have stiffened up their sound and flexed broader muscles to create an album which leaves one breathless and fired up whilst basking in an instinctive sweeping dark grace.

harmonies of dual vocalists Joris den Boghtdrincker and Mark Splintervuyscht, there is instant recognition that here is a galvanising and inciting experience waiting to flourish upon the senses. The drums of Joost den Vellenknotscher lead the way with a formidable hand whilst the bass of Rowan Roodbaert and guitars from Reamon Bomenbreker lead the battle cry. The sound reminds one of heavy metal Finnish band Stam1na more than of other folk/pagan metal bands showing that Heidevolk openly stand apart from similar genre bands.

De toekomst lonkt raises the intensity further, the song rampaging forth with a determination and willingness to engage forcibly whilst still surging with vocals that spill strength, confidence and pride. Musically Heidevolk are as accomplished and impressive as they are incessant and irrepressible but it is the vocals that set the band further apart from the likes of Tyr, Ensiferum and other pagan metal bands, they are simply soaring and glorious whilst retaining the power and might the music needs. The song sets the heart up to stand tall and confront whilst the following likes of Het verbond met Rome and Wapenbroeders only go to reinforce the inspired quickening of breath and eagerness ignited within.

Songs like Als de dood weer naar ons lacht, the thrash/folk bliss of Einde der zege, and the wonderful melancholic acoustic instrumental Veleda, show the diversity and versatility of band and album, a release that offers a varied feast on each and every slice of folk metal presented. Musically Heidevolk do not push boundaries as far as they certainly could but with sounds as easily consumable and uplifting in spirit as those on Batavi it is not a real complaint, and with such bass and baritone vocal might ripping through each song the deficiency is barely noticeable.

Batavi is stunning and an album that can only bring good things to the ear and music, Heidevolk use adrenaline and uncomplicated mastery to enflame the senses and show pagan or folk metal has no need for tricks or frivolities to be a genre with true heart and quality.