Apart from the stirring and sonically intrusive sounds upon the debut album from Greek black metalers Erevos, the most notable aspect of Descensus Ad Inferos is the imagination which frequents its shadowed corridors. Though the creativity is not always openly apparent at first glance the quintet from Thessaloniki layers their music with an impressive and very pleasing varied ingenuity. Descensus Ad Inferos is a very fine album which the more attention it is given the deeper the pleasure received.

Formed in 2004, Erevos drew good reviews and responses from their first demo of 2005 Burning Souls onwards. Despite a line-up that changed almost consistently over the years the band grew in stature and strength proven by their second demo Mythological Evil the following year, and a split release and the Adou Katavasis EP later. 2010 saw the current line-up of two of the band founders in vocalist/bassist Growler (yes we chuckled at that too) and keyboardist Tisifoni, plus guitarists Pias and Abraxas, and drummer Tek established and settled. In May of last year the quintet then entered the studio to record Descensus Ad Inferos, the result a well thought out and crafted symphonic lined black metal gem.

Against a formidable and towering blend of persistent riffs and a blackened consuming groove, the opening track Adou 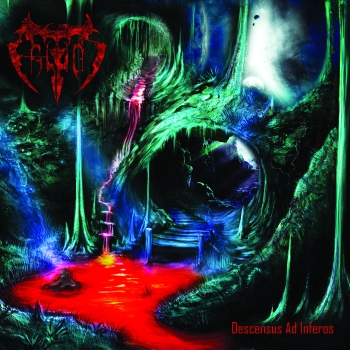 Katavasis spreads its distinctly dark arms around the listener. Punctured by a simple solitary keyboard interaction the track evolves with menace into an excellent trash fuelled assault of black metal intensity and guitar manipulations. With a complimentary production the atmosphere of the track and its successor The Omnipotence Of The Judges is as effective as the growing intensity, a ferocity that grows as the album progresses. With guitars that light up the ear and keys which place a melodic weave of sounds around and through the directness elsewhere, the song is a stirring composition with a strong mass from the impressive assaulting rhythms and hungry bass of Tak and Growler respectively, the malevolent growls and caustic delivery of the latter adding a further snarl to the song and album as a whole.

As Decensus Ad Inferos unleashes each track it gets better and better, the mightily relentless intrusion of Kires and the magnificent beast that is Those Who Decide About Fate both flexing muscles of quality and creativity. The first has a rawness and honesty to it that attaches like a sonic leech whilst the latter leaves the sense staggering under its immense oppressive intensity. Both add a unbridled rock n roll element to the music providing further evidence of how the band multi task in styles within their songs. With keys that coax the ear like a mischievous angel to open up for the rampaging beats and destructive riffs, the song is only matched by the later Kerveros for the greatest moment on this excellent album.

Kerveros takes things more into death metal territory, its heavy intent a rolling boulder through the sparkling keys that flash behind the force. The musicianship as it is throughout the release is striking and a major factor in the success of each song. No one plays to excess, each member pushing themselves but within the tense and tight format of the songs. This makes the tracks on the surface seem rather straight forward and they are uncomplicated on the whole, but beneath there is a bubbling stream of ideas and spectacular though subdued essences waiting to be discovered.

The likes of Erinyes with its hellacious ear twisting groove and the brutal Grotesque Blasphemy (Slaughter pt.1), a track that grabs by the throat as it forcibly rams forth its contents, keep standards extremely high. The album is a blackened rapture for the soul conjured by a band that really have a defined destination and direction for their invention.

As the closing carnivorous bass and emotive keys only closing track Adou Anavasis explores the senses with intriguing ingenuity and sinister drama one knows they have just experienced a release from a band that with a tight continued rein on indulgence will create something even more special in the future. Erevos have given black metal food for thought and us a feast for the senses.