After being completely infected and charmed by their debut album Do The Job, the review of the Baddies follow up Build was never going to be anything less than enthusiastic in their direction though there was still a part ready to chomp down on any deficiencies found.  The first single from the new album Bronto indicated at the beginning of the year that things had moved forward with their sound but now we have Build to prove if it was so. The answer is that the instigators of kinky hooks, beautifully erratic rhythms, and melodies that play hop scotch on the ear have not only returned with another stunning release but taken their sound into depths and risen to heights that exceed already enthused hopes and expectations.

After the deserved and almost crazed response to their 2009 debut form a great many, and the UK band embarking on a schedule that took in an arduous tour schedule of 180 shows in 365 days across the world which included taking in 32 major European festivals, the quartet not so much took a break but slowed things considerably as they went into thinking about and creating the successor to their successful debut. Using Pledge Music to help raise finances for the release whilst remaining strongly independent and reaching closer to their eager fans, Baddies release Build on March 5th and surely destined to ignite an even bigger response, acclaim and adoration.

Battleships, Open One Eye, and We Beat Our Chests uncompromising in their intent to infiltrate and control limbs and senses, turning them into thirsty marionettes. Build continues this incisive attack, bringing more additive voracious lures and instinctive harmonic essences but now with a more refined and rounded shape that  is as effective but even longer lingering and insatiable. Basically the Baddies creativity, songwriting and sound has grown, spread and dare one say matured into an even more vibrant and impressive creature.

Whereas their previous album was riotous, Build consumes in waves of gentler expressive sounds but to no less effect or impressive wonder. Do The Job threw  grating quirky crunchy guitar jabs and punchy rhythmic kicks to the ear but Build whilst taking the best of those elements fuses them into soaring electronics and graceful harmonies with a flair that is musically poetic and steamy. The album bursts into life with the slightly familiar sound and territory of the excellent Rewire. A sweeping synth cradles one in the songs arms before the guitars leap upon and bounce incessantly around the ear. Vocalist Michael Webster and fellow guitarist Simon Bellamy litter the senses with kinetic and contagious stabs whilst the futuristic inspired electronic sounds dazzle and sparkle around them.

The stunning start continues with the Frankenstein Man Made Man, another song that simply whips one into a frenetic ball of enthused hunger for more and more. The track weaves between excited agitation and a laid back melodic sensual symphony to create something glorious yet an unbridled aural solicitation. The first two songs bring older Baddies into a new expansive version that is irresistible, the man and science theme of these and the album intriguing and pleasing.

Every song within the album is without exception pure quality, from the sparkling yet provocative Mind Machines with a Thomas Dolby like flavour, to the big pulsating rhythm punch of The Lightmen. The latter of the two with its tingling electrified flow driven by the roaming throaty bass of Danny Rowton, who is imperious throughout Build, and the inspired mountainous rhythms of drummer Jim Webster, has a Colin Moulding written feel of XTC as well as of Young Knives. The swell of great vocal harmonies, expressive lyrics and their delivery an expansive gorgeous journey. 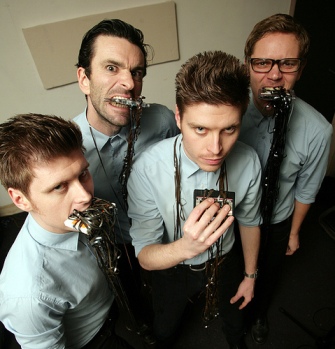 The XTC sound appears again in Excess Energy to great effect, but despite these references Baddies are undeniably and wonderfully unique. They also are distinct in the diversity within their music, something openly obvious in the likes of the album’s forthcoming single Talk To Me Germany, the stunning Centurion, and the stirring These Animals. The first is a stoked burst of punk pop joy whilst Centurion is a pulsating electronic mesmeric light brought with a slight John Foxx/ Bill Nelson touch in its scintillating sparkle.

Bronto like the opener is the perfect connection between the older sound and the new hypnotic direction the band has spread in to. The song is as virulent as any song you are likely to hear anywhere, its electronic punked venom impossible to deny as it firmly grips with its hot thirsty urgency. It has a chest beating defiance that can only inspire one to join its intent and chorus in emotion and voice. Do not be surprised that once having heard the song it reappears in your head at numerous and any time, it is an infection with no known cure.

Closing on the captivating Star Surfing and its celestial majesty, Build is simply magnificent. Baddies have once more revitalised and given a new rousing energy to not only alternative indie music but music in general. If craft, originality, and inventive music which inflames your every day with warmth and rampant fun is the juice for your thirst, than Baddies is your first and essential option.