Black metal comes in many malicious dark shapes and sizes to generally stretch and twist the senses. It is a genre that plays with fears, toys with emotions and intrudes with caustic effect, numbing and violating from the ear inwards. Austrian black metal band Hellsaw does this and much more. Their fourth album Trist, released February 24th via Napalm Records, is a blistered beast that eats away at the flesh, consumes all feelings and leaves one a scattered pool of depleted energy and numbed emotion. It is an album that one finds hard to know if they liked it as all that is left at the end of its extreme and unpredictable sounds is a shell devoid of being able to conjure rational thought, it is that demanding, consuming and powerfully effective.

Formed in 2002, Hellsaw influenced by early 90s black metal bands began their destructive ride with their debut release Sins of Might, this coming a mere few months after forming, and  first album Spiritual Twilight in 2005. The band drew and gathered up strong attention, their uncompromising sounds setting them apart from other similar bands. Initially a project consisting of just drummer Svart and vocalist Aries, who also took the guitar and bass roles, the band had to evolve and began touring throughout Europe with session musicians, the expanded band garnering more solid acclaim and growing fan base. Subsequent albums Phantasm and Cold, this their first with Napalm, increased their musical stock and popularity. Guitarists Malthus and Isiul as well as bassist Desderoth were now permanent members of the band and the full force of Hellsaw being unleashed as shown with Trist.

The album is a gnarly beast, a release that rips at and abuses the senses with an evil intent that is openly and proudly 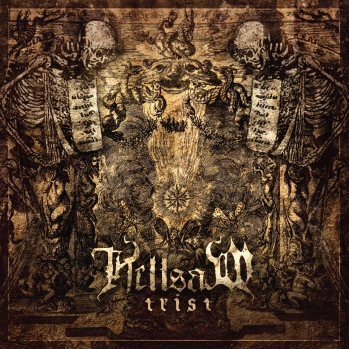 carried like a flag of combat. Trist runs with traditional black metal sounds a lot of the time but avoid predictability by veining it with unexpected and intelligent intriguing diversions. It teases and taunts, never giving you what you assume, and just when it looks like becoming slightly formulaic the album will turn on its tail and writhe with something unexpected and diverse. It is these touches which makes the album worth full attention throughout.

The Devil Is Calling My Name opens up the infernal damnation of the senses, though at first its slow awakening is a deliberate falsehood to entice and beckon. As soon as one is hooked the track explodes into scorched riffs and a flurry of bullying drumming. The rasping vocals of Aries spew every word with acidic venom, coating the lyrics with sonic bile complimenting the razor sharp guitars. The song is malevolent, the bass of Desderoth lingering behind the assault of the guitars to grab its prey periodically, though that is more due to the fact that at certain times it is hard to consistently hear the growling basslines.

It is an impressive start to an album that maintains a strong level throughout but with definite peaks in the likes of the brilliant Doom Pervades Nightmares, A Winter Cold, and the imaginative closer Silence. The first of the three is an excellent nasty aural corruption, and the first of the more varied tracks offered within Trist. The groove and razor sharp guitars slice through the senses whilst the grouchy basslines are insistent and intimidating. Aries is pained and bitter, his demonic delivery distressing and enticing, a force as potent as the sounds. It is when the track steps off track into a melancholic mandolin led instrumental climax that the song truly unveils its beauty and uniqueness.
A Winter Cold is part chant, part frosted celebration, and all direct bitterness. The song is less about the violent assault than the creative melodic grandeur the band can also summon. At times it ventures into a blackened thrash sound that is inspired and a welcome diversity. Silence brings a wonderful melodic opening song but soon erupts into a full on confrontation but still with a melody driven core that is impressive, further proof that Hellsaw are musicians that can write and realise well crafted songs of blended beauty and malevolence.

The album does have its flaws, mainly in the drums production which is annoyingly tinny, and the slightly predictable vocals of Aries. There are moments one wishes his delivery was as diverse as the sounds within Trist. Despite those things, which are more personal preferences, the album is an impressive release that puts recent black metal releases in the shade. It is creative and at times adventurous within the defined limits of the genre, it is also ultimately enjoyable.