It has been five years since German symphonic metal band Xandria caressed the ear with new material, the band to some extent taking a break but the wait is over with the release of their new album Neverworlds End, and what an impressive release it is too. The band returns with a new vocalist and the continuation of the majestic soaring sounds that set them up as one of the more important bands in the genre. This continuation does not mean it is more of the same though as the quintet has unveiled an album and sound that whilst retaining all the grace and elegance they always effectively offer, has a real bite to its sound now. The band has fused into their music a clear metal vein, a powerful and at times intimidating intensity which is glorious. This new flavour intensifies the album, its blending of menace and beauty into a formidable and striking release deeply inspiring.

Formed in 1997 by guitarist/keyboardist Marco Heubaum, Xandria has constantly built up a fervent fan base and impressive acclaim from debut album 2003 Kill the Sun and especially with their subsequent albums Ravenheart and India in 2004 and 2005 respectively, to Salomé – The Seventh Veil in 2007. Renowned for their stirring and dynamic live shows too the band in 2008 had to take stock with the departure of vocalist Lisa Middelhauve. With a couple of changes in between the band found and recruited Manuela Kraller (ex-Haggard and Swiss band Forty Shades)to front the band in the dying weeks of 2010, her live debut coming a few brief weeks after. Whether she was part of the instigation for the new approach found on Neverworlds End time will unveil but the band has returned with a new energy and intensity that takes them and the genre to greater heights.

Released via Napalm Records worldwide by the end of February, Neverworlds End as mentioned marks the debut of 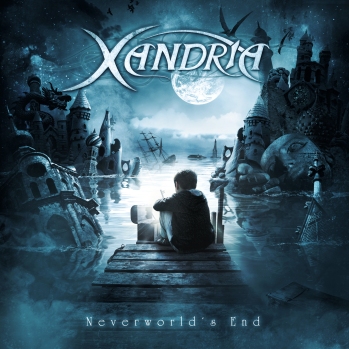 Kraller. With a style reminding of former Nightwish vocalist Tarja Turunen though with more restraint and self control, Kraller swoops and soars within the songs caressing the ear constantly but also finds a complimentary tone for when certain tracks bristle and pace with the metallic energy the album unleashes.

The opening track A Prophecy Of Worlds To Fall immediately indicates the new intent in town, the gothic vocal harmonies and keys from Heubaum soon joined by an ominous dark presence soon emerging as predatory riffs and rhythms. The track sweeps into warm symphonic realms bringing a theatre and emotion the band is known for but always there is the darker threat waiting, lurking for its moment to seize the senses. Kraller from the off shows her stature as a singer and a very satisfying skilled delivery, her voice riding easily upon the rest of sound created by the keys and guitar of Heubaum and fellow six string maestro Philip Restemeier.

The album has a strength and beauty throughout, tracks like Forevermore, Blood On My Hands, and The Dream Is Still, stylishly bringing together alluring melodies and harmonies with firmer and heavier intense elements. There is a drama and immense emotive grandeur throughout the album that sweeps one up on its eager arms. As good as previous releases were Xandria feel like a new band on Neverworlds End, as if they have emerged from an aural journey to a new plateau they were destined to build. There is still a place for their power ballads within this new direction as in The Lost Elysian and A Thousand Letters, but with an iron intent now guiding their flight.

It is when the band really crank up their metallic side the album really excites. The rampant energy of the heroic sounding Euphoria, the glorious imposing might of Soulcrusher, and the wonderfully chaotic aggression of the excellent Cursed, are magnificent tracks that fuse monumental beauty and grand melodies into a colossal potent metallic grip and attack. Drummer Gerit Lamm holds authority with his impressive demanding rhythms whilst bassist Nils Middelhauve casts grumbling and growling basslines into the ear with the utmost skill. He is a highlight in every song; his prowling attitude drenched playing masterful.

Neverworlds End is a total delight and announces the return of Xandria as an event to immerse oneself into. The band has evolved into a mighty handsome animal and with a hope they continue in this new intense and mighty vein, symphonic metal has never seemed so attractive.