A date for your diaries, February 22nd, the release date of the new eagerly awaited EP from UK rock band Karn8. It has been a long three years since their previous release, the 2009 album Of All The Strange Things, though the band has constantly kept busy with their hard work ethic of consistently gigging which has built up a fervent fan base at the same time. The Sick EP sees their return to recording  and shows the band has not only continued where they strongly left off but evolved into an even more impressive and essential band. The four track release owns the ear from the very first note to its last. Taunting and engaging, provoking and inspiring, the EP is an instinctive feast of intimidating riffs, wanton grooves, and additive swagger. Karn8 and their music make one feel dirty, lascivious, and most of all deeply satisfied.

Since forming in 2002, Karn8 has relentlessly riled up the senses with original creative rock sounds driven by provocative sex fuelled energy. Previous EPs Wicked Boy, Destruction Is The Answer, and Everything That You Despise, as well as the aforementioned album have rippled with tracks that excite and inspire with formidable additive sounds and a raunchy seduction. Sick not only continues this attack but raises it to irresistible proportions.

The title track opens the EP and immediately lays a claim for the track of 2012. It is hard to imagine any song matching 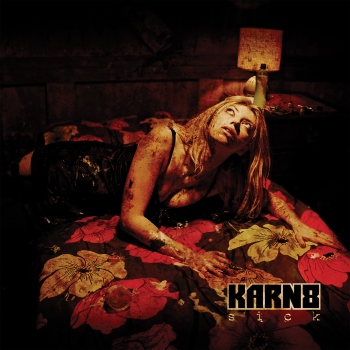 let alone surpassing the sleazy orgy of pleasure that is Sick. The song saunters in on a teasing riff from Bones with his baritone guitar, as always the sound he produces is devilish and siren like. Within moments vocalist Kirst unleashes her seductive charms, her voice wrapping itself around the ear to caress and enthral with wicked glee. The song unveils a groove as essential as breathing, its scorched tone intertwining with the senses in a deliciously dark manipulation. As notable as the sound within the track is the union of vocal and silence two thirds in, Kirsts mesmeric suggestions surrounded by a silence that teases as it stretches the absence of sound to its limit. It is inspired and why Karn8 command such devotion one they sink their hooks in.

Following track Change My World is a gratifying full on rock tune, with the drumming of Leigh allowed to flex its muscles far more than the opener permitted. The band is always hard to compare to others which is wonderful, but here there is a slight Hole meets Kittie feel. The song rides an energy that is eager and insistent, with Bone’s guitar driving aural shadows into the ear alongside the vibrant vocals.

The EP is completed with more generous sounds within Stuck and Nothing. The first cruises through the ear with self-assured vaunt, its groove and sweetly mischievous vocals swaying like a cobra before the ear, ready to infuse their welcome captivating venom. With a tinge of Spinnerette about it the track it soothes and riles up the heart with equal measure. Nothing shifts into a more hard rock orientated track though being Karn8 it comes with their own distinctive flair and thorny style. Kirst bewitches and commands with her vocals yet again, her ability to twist, beguile, and exploit her audience as powerful in the studio as it is live. With Bones and Leigh destabilising the senses with their corrupting heavy and sometimes abrasive riffs and intrusive rhythms, the trio succeed with their determination to expose and feed the senses with the finest seemingly spontaneous rock sounds possible.

Sick is a masterful release that with any justice will see it and Karn8 an important and obvious part of a vast number of personal playlists. Just give them a chance and listen and you will not be able to resist, and with another year of committed gigging and a proposed recording of a new album, this is the time to get your dose of the Karn8 sickness.

Tags: Destruction Is The Answer, Everything That You Despise, Hole, Karn8, Kittie, Of All The Strange Things, RingMaster Review, Rock, Sick, Spinnerette, Wicked Boy