This Vicious Cabaret – City Of Ghosts

City Of Ghosts the debut EP from UK post-hardcore band This Vicious Cabaret is a fresh and exuberant burst of rock that pounces upon and feeds the ear with accomplished ease and lingering satisfaction. The four track release is a rewarding energetic introduction to a band that one feels has even more promise and quality within them than shown on what is a thoroughly pleasing first release.

From Watford This Vicious Cabaret has  built up a fine reputation for their highly charged live shows since forming in 2009, their creative blend of aggressive hardcore and catchy melodic rock sounds drawing in an ever increasing following and support from media, radio and fans alike. From the evidence on City Of Ghosts it is no surprise how they are growing in stature and one assumes rapidly as the songs here have no intentions other than to please, thrill and entertain their audience, simply put to give all a good time.

The opening title track tells you all you need to know about the band, energetic with thumping rhythms, stirring riffs and

a bassist in Lex Mead to mesmerise with ear grabbing basslines it is instantly enjoyable. Vocalist Jason Thorn’s emotive delivery is impressive giving the song a different vein of strength to power it easily through the ear. Alongside fellow guitarist Joe Davis, the duo spread the song to its limits with crashing punk energy and thoughtful engaging progressive play framed by formidable drums and direction from Radman. An impressive start continued by ‘New Disease’.

Toying with the senses the track is an intense yet playful beast that scoops one up in its forceful grasp to explode in the ear.  The mix of power and carefully crafted impassioned melodies is impressive and inspiring. Many try and leave one thinking it would be better if they had gone one way or the other but This Vicious Cabaret have melded a perfect fluidity that keeps the tracks in full rampant mode whilst exploring their obvious creativity of sound and melodies.

As the EP plays it gets better and better with ‘Entry Points And Exit Wounds’ lifting things even higher. Punk infused the song is immense and the more one listens the better it gets. Another insatiable grumbling bass attack from Mead ensures full attention whilst the blistering guitars eagerly dance all over the ear. As the track progresses it feels as if the pace  is going to veer out of control, the song teasing with suggestions of chaos but the band’s firm hand and skill keeps it perfectly reigned in. 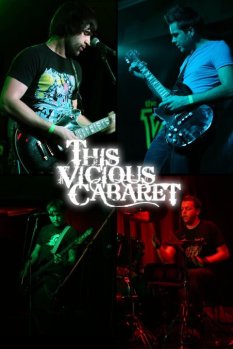 Not to let the sequence go in decline final track ‘The Fall Of Icarus’ finishes things off by unleashing more red-blooded riffs and vigorous rhythms.  The sudden slow down and emotive climax to the song is the only time the EP did not quite work but that is more a personal thing as there is nothing particularly wrong with it, Thorn as throughout delivering great vocals and passion with the lyrics, but it just felt out of kilter with the robust song and usual seamless switches elsewhere in tone and pace.

The band openly list influences as the likes of Funeral for a Friend, Alexisonfire, Finch, and Coheed & Cambria and if you have a liking of those This Vicious Cabaret is definitely a must hear for you. As the final track played it dawned as to another they have a similar flavouring to, Rocket From The Crypt certainly in the energy they produce and the vocal department.

City Of Ghosts to be honest may not be the most ground breaking release but for a debut it is deeply impressive and the more you listen the more it connects. It is a must check out and as the band have it as a free download on their Bandcamp profile there really is no excuse not to, besides any band that lists Reuben under influences has to be special right?

Get ‘City Of Ghosts’ @ http://thisviciouscabaret.bandcamp.com/