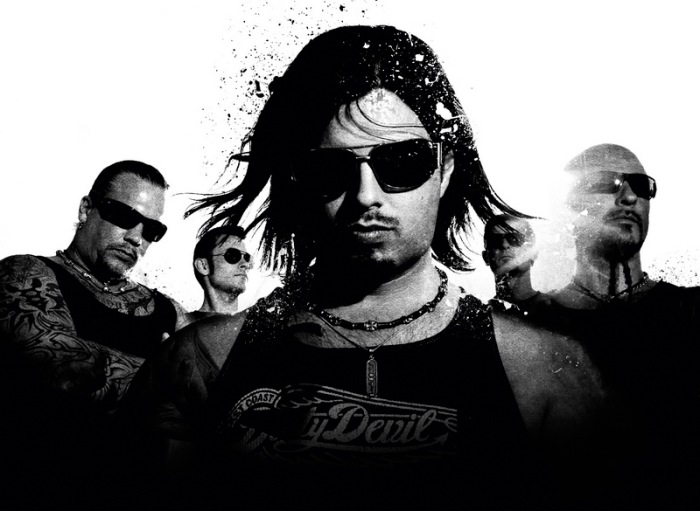 With the recent signing of Danish groove metal band Chainfist in a worldwide management deal with Rock N Growl, the band’s debut album came back into view so we thought it was time to dive into it and get a taste of things to come. The band has just finished recording a 3 track promo with producer Søren Jensen with the results to be mixed by the legendary Jacob Hansen and from the evidence of their album Black Out Sunday there is nothing short of eager anticipation and high expectations building for its release later this year.

Consisting of Jackie Petersen (vocals), Michael Kopietz (guitar), Jesper Heidelbach (drums) and Braca Pedersen (bass) Chainfist recorded Black Out Sunday in 2010 and gathered some good acclaim upon its release. Since then the band has been joined by the skilled guitarist Thomas Hvisel recently, to take over lead guitar and there is a sense that the band now a quintet, is only going to be more powerful and creative.

Chainfist has strong pedigree with members previously in the likes of Infernal Death, Epicenter, Panzerchrist and

Frozen Sun. Their individual ability and accomplished songwriting is evident from the opening track to the last lingering note of Black Out Sunday. Chainfist’s sound is a heady mix of metal, heavy metal and hard rock, the band seamlessly blending the flavours into an intriguing and thrilling beast of a sound that offers something captivating and powerful at every turn. First listen brought an appreciative nod and full enjoyment but upon subsequent plays as more and more qualities emerged within songs the album simply worked itself deeper and deeper to become one of the more rewarding and satisfying rock releases heard in a while.

The infectious rampant ‘Free Me’ opens up the onslaught of Black Out Sunday. Driving riffs, dominating rhythms and a swinging groove from start to finish make the song a vibrant exhausting party. The vocals of Petersen are clean, crisp and expressive yet hard and aggressive in the right spots. The track does not offer too much new but to introduce a release and band it is an insatiable pleasuring of the ear. If you are looking for an explosive straight forward rock song this is it.

The songs from here on in are nicely varied and creative whether more melodically led as in ‘Edge Of The World’ or on a thunderous charge as in ‘Be A Man’. The latter of the two is an aggressive little fiend of a track, defiant and carrying a stunning senses twisting teasing groove. It recalls elements of the likes of Society 1 as does the brilliant ‘Have You Ever’. This song is a gloriously dark pulsating brute winding within the head and heart with sinister riffs, grouchy basslines and a hungry waspish groove that consumes relentlessly.

It has to be said when the Chainfist go for the heavy and intensely direct route they really light up the senses though their ‘mellower’ melodic flows are just as gratifying. In the excellent ‘Stay’ the band begin the song with an emotive voice and feel before the song lifts off into a forceful but controlled rock song. On the less aggressive songs such as ‘Show Me’ the band has a sound that reminds of bands like Volbeat and Dommin with a touch of Danzig which pleases just as much as the heavier more intense tracks.

Throughout the album feeds the senses wonderfully with the chugging riff fest of ‘In Your Face’, the rampaging mischievous and venomous chaos of ‘Clown’, and the chunky guitar loaded ‘Blackout’ as striking and thoroughly as stirring as those previously mentioned. Black Out Sunday is simply a great rock album from a band that has yet to find one feels its full potential. Guitarist Michael Kopietz has said “The new material is stronger, heavier and even more melodic than the songs we made on our debut CD Black Out Sunday.” We say bring it on!

Chainfist – Have You Ever