Dark, heavy and thoroughly imposing the debut album from US doom metal band Pilgrim is an immense beast with monstrous sonic claws that show no mercy once their undeniably epic and extremely satisfying grip has clasped around and into the senses. Riding the intense brutal form of “true doom metal” Pilgrim assault and bludgeon deep beyond the ear whilst pleasuring and igniting black deep emotions within. Their new album Misery Wizard is a colossus of black dirges, resonating ravenous riffs and blistering caustic melodies dragged from the pits of hell and sorcery.

Formed in 2010, the Rhode Island trio of Krolg, the Slayer of Man (drums), Count Elric the Soothsayer (bass) and The Wizard (guitars and vocals) openly take inspiration from the likes of Black Sabbath and Pentagram, the weighty classic feel  soaking every pore of Pilgrim’s oppressive yet invigorating sound. As mentioned the album is brutal but without being openly destructive or violent, its slow drawn heavy mass enveloping every sense to wear away defences and consume whilst enflaming and instigating full unbridled pleasure. Pilgrim dominate through sonic persuasion and crushing drones, the lengthy passages and journeys of the tracks an experience that absorbs everything from ear and thought to the primal inside.

Misery Wizard is unleashed via Metal Blade Records on February 14th and is in many ways a real example of a slow burner.  The initial listen finds the great positives that live and flourish within its dark long winding corridors but at first the slow grinding muscular ripples that drone across its bulk give up more the similarity between tracks that seem to pay homage to their open influences rather than use them as inspiration for something strikingly new.  That is at first for given numerous listens the album’s slow consuming intensity immerses one deeper and deeper into its depths to find oneself mesmerised and eagerly wanting more.

The tracks within Misery Wizard are boundlessly instinctive; their natural intense flows taking the listener down six 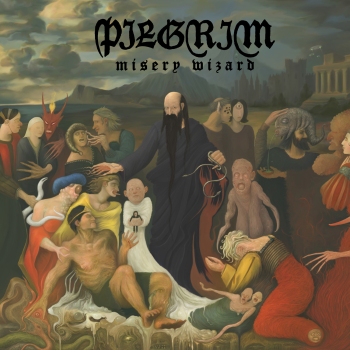 epic travels that only once lie short of six minutes plus, the majority touching ten minutes or more. Often doom metal drags and lumbers at such lengths but with Pilgrim it feels the right evolution of a song, the music taking its time and only departing when it is finished not when told it should. The impressive eleven minute title track and the closing thirteen minute unsettling ventures of ‘Forsaken Man’ are the best and most fulfilling examples. On ‘Misery Wizard’ the band twists and turns eagerly and the track ebbs and flows all within the dense sound and it engages from first note to last despite its lengthy intent, whilst ‘Forsaken Man’ strikes with an initial sonic violation that brings heat and blood to the surface, the track being the one time that listening is somewhat uncomfortable but at the same time deeply hypnotic to ensure due attention and focus.

The equally hungry formidable songs of ‘Astaroth’, ‘Quest’, ‘Adventurer’, and the down-tuned majesty of the enthralling ‘Master of the Sky’ satisfyingly complete the album with equal power. Misery Wizard is an effortless listen, its uncompromising guitars, imposing riffs, slow mesmeric melodically strained vocals, and unrelenting smothering intensity combining to make a release that one cannot deny or want to refuse attention. It may not be the most original album in recent years but it is one of the most captivating and easily returnable to.