UK rock band Decode begin 2012 in the same vein they graced the previous year, with a fine release in the shape of new single Before We Burn. To be released February with an  excellent accompanying video, the track shows a band on a strong rise and one that crafts music with minute attention and passion. Previous EP Shaping Shadows from 2011 announced the band as ones to watch with its fascinating blend of big rock sounds, engaging melodies, unpredictable twists, and metal edges. The new single cements all previous thoughts whilst placing Decode as a band on the verge of greater heights.

The Sheffield quartet (a five piece live) have recently linked with Ambicon Records and one can only feel things are falling into place for a band already acclaimed for their music and vibrant live shows. Their sound is a heady creative mix that recalls the likes of Fightstar and Taking Back Sunday as well as Manchester band Our Innocence Lost and label mates Down The Machine. The guitars of Adam Mintram and vocalist Daniel Jeffery rampage through tracks whilst bringing stylish and often intricate melodies and variation. The band are not afraid to add swooping keys and haunting strings either to make each track an experience that holds something new no matter the amount of times you listen to it.

The single opens on an emotive guitar before harsh growls lay on top leading to excellent smooth vocals from Jeffrey. The frontman’s delivery is expressive and controlled, the song’s passion dripping from every word, and assisted by the equally strong vocals of bassist Lewis Wild their vocals are as compulsive as the sounds surrounding them. Before We Burn is littered with rock hooks alongside its metallic aggression and though these never slip into the obvious they are easily digestible and mesmeric.

The single is a natural progression from the Shaping Shadows EP, the track feeling an easy fit with the songs making 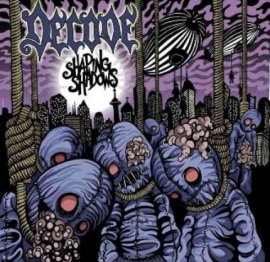 up the previous release. This does not mean a lack of progression just the high quality of the band’s songwriting from day one. Released April 2011 the EP is a bustling and exciting collection of songs. From the opening title track the release unleashes everything the band possesses from power and aggression to creativity and melodic intricacy. With sing-a-long parts and teasing hooks the song is an instant invitation to the band and their stirring rock sounds. The bass of Wild is deep and taunting, playing with the senses whilst drummer Daniel Greasley wonderfully softens up the ear with deliberate and skilled abuse and the guitars unveil their musical twists and turns.

‘Your Country Is Ours’, ‘If Only (We Live To Tell The Tale)’, and ‘The Days After You’ carry on the great and attentive quality whilst the striking and excellent ‘Enemies’ punishes and pleasures with equal measure and intent. So far every song unveiled by Decode has the ability and desire to rile up the senses whilst treating them to soulful melodies and infectious excitable energy. This energy that floods from the recorded tracks gives eager thought and anticipation to the impressive live force they must be and the carnage they unleash.

One still feels there is much more to come from within Decode to really define their sound but they are already leaving many other bands in their wake and 2012 feels like the year they will become the focus of a great many more enthused ears.

For a free download of the Shaping Shadows EP go to www.soundcloud.com/decodeuk