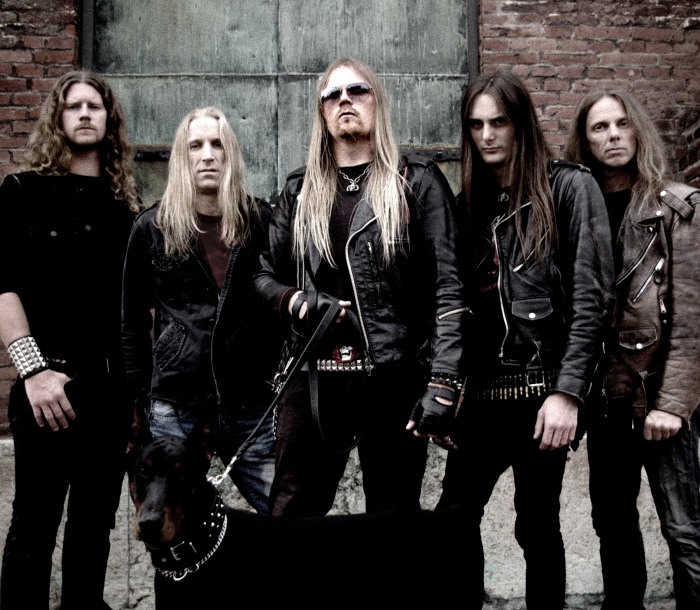 Mark it in your diaries; January 31st sees the return of Swedish heavy metal band Ram with their new album Death. Released via Metal Blade Records the album places the band back to the fore of the genre, its powerful and thoughtful songs a treat for all hard rock and metal fans from classic to heavy. For even those that feast upon the more muscular and harsher sounds that consume there is plenty to engage with on Death, its varied elements holding delights for all.

Formed in 1999 by guitarist Harry Granroth to play the music he wanted to hear not, as their bio says ‘the misinterpretation of metal that ruled the scene back then’, Ram soon found its thrust and direction with the addition of Daniel Johansson, another like minded guitarist to Granroth. Working together on Granroth’s wealth of written songs new compositions emerged, and Ram grew further still when they found vocalist Oscar Carlquist, another with a dislike of the current metal music and direction. The band was completed when drummer Morgan Pettersson and bassist Leif Larsson (renowned from his time with Frozen Eyes) joined up. The quintet had an instinctive unity in making real metal which found an immediate connection with people when they released their debut EP Sudden Impact in 2003. Shows and festival appearances soon followed as did a tour with Sebastian Bach. Live shows was and is the band’s forte garnering acclaim and increasing amounts of new fans over the years at home and around Europe though their full-length debut Forced Entry of 2005, and album Lightbringer in 2009 did them no harm either, both drawing excellent responses. The year before the band recorded Lightbringer saw Larsson asked to leave the band to be replaced temporarily by Tyrant of Nifelheim and in 2009 permanently by Tobias Peterson.

2010 saw the band enter the studio to record Death with producers Per Stålberg and Olle Björk, and last year the

signing with Metal Blade Records for its release, a label that seems the perfect like home for their striking metal sounds. The band themselves stating “We are very pleased and proud to sign with a metal label that has done so much for heavy metal and has such an amazing legacy.”  The album is a pulsating array of hard rock sounds delivered on metal riffs and attitude and is a perfect fit for the varied and dynamic roster the label has built, even more so it is a feast of rock thrills that will excite a great many.

The title track opens the release and in many ways is the best thing on the album. There may be better songs and equally enjoyable tracks but it is immediately striking and attention holding with its atmospheric instrumental ‘drama’. Dramatic in that it brings a powerful emotive peace and threat at the same time and though not a true representation of what is to come shows the quality within the band’s creativity. ‘…Comes From The Mouth Beyond’ takes over to rile up the senses with its expressive rampage through the ear. The song is a stirring array of scorching guitar play and storm powered riffs and excellent vocals from Carlquist. The track also twists and turns ensuring there is always something to intrigue and excite and but for the wonderful ‘Flame Of The Tyrants’ further down the album’s playlist would take best track honours.

‘Flame Of The Tyrants’ like a whirlwind picks up the senses buffering them with eager riffs that relentlessly thrust through the ear whilst the commanding bass and punchy  drums drive the track effortlessly. The track is partly anthemic and a kind of call to arms that gets pulses racing and one can imagine its power live easily, with its ability to pull such enthused response.

The rest of the album is less stunning compared to these tracks but still impressive in its sound and songwriting. Tracks like ‘I Am The End’, ‘Defiant’, and ‘Under The Scythe’ bringing honest and hearty metal that is impossible to not enjoy to some high degree. One has to admit that heavy metal music of any kind is not the sweetest flavour here but Ram had no problem in wiping away that prejudice and satisfying these ears. With a limited first edition to include a DVD of the full show Ram played at the Keep It True festival in 2010, Death is an album eager to please and thrill and it will, try it.