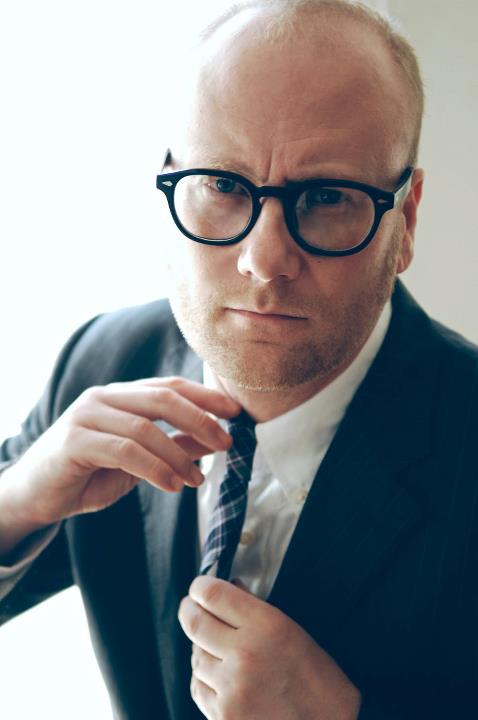 The time for presents and treats maybe over with the festive season a swiftly departing memory but Mike Doughty in the form of his brand new album has presented the heart with one of the biggest gifts possible. From start to finish Yes And Also Yes is a glowing joy, a release rippling with well crafted exciting songs to offer a feast for the senses. Consisting of fourteen vibrant, witty and mesmeric indie pop songs the album gives an engaging and diverse presentation of inspired quality song writing and its realisation.

Yes And Also Yes is Doughty’s fourth album and a natural continuation of the sound that blessed previous release Sad Man Happy Man of 2009. It has not taken a giant leap on from its predecessor sound wise but the songs within Yes And Also Yes have a rounder feel, a more defined sound, I guess the best word for it is maturity. The album is as ever from the former Soul Coughing frontman full of fun, the wealth of great songs carrying a mischief that can only endear the album further. The title of the release comes from the headline for his profile on an online dating site and just epitomises the wordplay and humour he instinctively graces his songs with.

For those new to the man, Doughty’s music is an imaginative meld of indie, pop, subtle rock, folk, Americana and plenty more. Each track has an individual life that gives a great variety to the album, but to be honest it is the extra little offbeat and unique unpredictable sounds and twists that he often employs as additives to spice songs up that make the man really stand out far ahead of the crowd. Unpredictable and sometimes darkly surprising these moments elevate songs far beyond the norm though no song could ever be called predictable. Slight discordance, heart twanging strings, and skilful slightly dark inserts are among the enterprising ideas unveiled throughout the album to wonderful effect; he even uses a capsule of the antidepressant duloxetine for percussion.

Opening track and single ‘Na Na Nothing’ immediately sets the upbeat tone that veins the album even within its more emotive subdued moments and has the juices of anticipation running long before its end for what is ahead. It is incessantly catchy and impossible to resist joining in on for its chorus, the song simply and eagerly leaping through the ear to play joyfully and warmly on the senses. The overall sound on the track and often elsewhere especially vocally in songs is like a heady exhilarating mix of Frank Black and Graham Parker with splashes of choice Elvis Costello essences.

‘Into The Un’ a song about goth kids on LSD in a train station, continues the wonderful start but then again every song does so that by the closing note of Yes And Also Yes one has the same feeling as going through the first. The high level is maintained impressively but a few songs really played the heart like an instrument to satisfy and impress thoroughly such as ‘Strike The Motion’ with its pulsating mesmeric keys behind the song’s front giving as does the following ‘Have At It’ a stirring sound that plays like the union of Costello and Rocket From The Crypt, and ‘Makelloser Mann’. Brief and sung in German, Doughty simply singing a bunch of random, peculiar phrases, the music has a lovely B52’s sounding riff and melodically teasing keyboard, more evidence of the variety and creativity within the album.

The great songs keep coming, ‘The Huffer and the Cutter’ brilliantly worded and full of dark additives, ‘Rational Man’ with its irresistible acidic strings over a metronomic eagerness, and ‘Weird Summer’ with its vastly varied landscape of sounds and flows bringing a Green Day riff, Doughty rapping, and more disturbed strings, all to play with the senses. The country lined ‘Holiday (What Do You Want?)’ featuring Rosanne Cash has to be mentioned too, and for one that has as much enthusiasm for Xmas songs as TV talent shows have for quality the song was rather pleasing.

Released on Doughty’s own label Snack Bar January 23rd, the album is a must hear. We have not really touched on the great lyrics throughout but that can be an extra undiscovered treat on investigation the release for you.  The album coincides with the release of Doughty’s autobiography ‘Book of Drugs’. Dealing mainly with drugs, music, and the “weirdness, and messed-up-ness, of life in Soul Coughing” the book is another highly anticipated discovery.  Treat yourself to at least one; even better spoil yourself with both.

For more on both check out Mike Doughty’s official website @ http://www.mikedoughty.com