The New Jacobin Club – This Treason

Though This Treason from Canadian shock rockers The New Jacobin Club has been out for over a year,  it and the band are new discoveries here at The RingMaster Review and because the find is so immensely enjoyable a review though late was an inevitable outcome. The first question was how on this internet connected earth it has taken until now for a band this good and formed in 1995 to capture these eagerly searching ears though the fact they have is all that matters.

Since its rise from the depths of its original conception in the dark creative minds of the original trio of which vocalist/guitarist The Horde remains, The New Jacobin Club have released four album and various EP’s, cassette singles and contributions to compilations, the first official release by the trio coming in 1998. The debut self titled album arose in 2001 and was the first to have bassist/vocalist The Swarm within the band’s dark ranks. Second album Retake the Throne was the moment the band really started to divert ears and eyes their way as college radio and international media began taking notice then in 2006 third album Wicked City and the single from it ‘Creeping Flesh’, pushed the band further out from their own home shadows as their undeniably eye catching live shows and wonderfully darkly

intrusive sounds toyed with more and more senses. This Treason takes the band even further out into the masses with a wonderfully flamboyant theatrical wicked essence combined with impressive striking heavy intense sounds and senses treating dark gothic creativity.

Alongside The Horde and The Swarm the band consists of guitarist The Fury, Brother Vitruvius on keyboards, drummer Rat King, plus The Luminous and Poison Candy on cello and theremin respectively. Together they have created a gothic punk , rock metal veined tour de force concept album which takes the listener into its eager and black bloodied depths as it explores the relationship and events surrounding the true life and death of England’s notorious warlord Sir Hugh Despense and his relationship with King Edward II, or as the band’s website calls it ‘A morality play set to music’.

uncertainty as to what they would sound like and maybe a little fear too not being an enjoyer of classic heavy metal. There was thought s that maybe they would be a band bringing the overblown pomp and excess of 80’s artists who over indulged with concepts and rock operas or maybe another Gwar type beast where they venture to close to ridiculous to win real credibility, though there might have been the warped corruption from the likes of Macabre to enjoy too. As the title track opened the album the theatrical grandeur was there, the welcoming soaring keys inviting with a flourish but then came a delicious grumbling bassline and gothic keys taunting the ear. One minute in here was one hooked, captured and trussed up victim to the merciless bombardment of pleasure feasting upon the senses. Tumbling riffs and dominant rhythms seize the ear as incisive hot guitars slither through  and the suggestion of sweet insanity  comes with the theremin intrusions. The track and subsequent songs have a little of everything and sounds from numerous sources but it is all distinctly The New Jacobin Club. 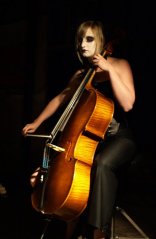 This introduction to the album and the tale to unfold could not be more satisfying and as subsequent tracks play and unveil the people and the events in the life of and leading to the death of our lead protagonist in the opener we are treated to an array of sounds, skill and pleasure. ‘Private Hell’ is a more heavy rock based track with Jerry Only like vocals, and gives reason for the often used comparison previously mentioned. The cello of The Luminous swarms and soars all over the track wonderfully and lifts it to even greater heights.

The musicianship of all is stunning as it offers up sounds and influences of bands like the two previously mentioned and often stated The Damned, Christian Death, Killing Joke, The Birthday Party and Maiden but others less expected spices oozed out too. ‘Countess Scorned’ offers up a taste of Wall Of Voodoo whilst the punk fuelled ‘The Fall’ is expanded with a heady mix of Asking Alexandria  and Alien Sex Fiend, and throughout one is reminded at moments of bands like The Mission, Southern Death Cult and fellow gothic bands. The best track of all on the album ‘Like Dogs’ which brings an irresistible mix of psychobilly spawned rock with a blend of The Cramps, Calabrese and Danzig.  A triumph that ignites the passions within and takes one on a primal dance around the length of its mighty display.  All proof that This Treason offers up a mesmerising array of sounds and despite referencing many it is all uniquely The New Jacobin Club once given their inimitable touch.

There really is not anything negative to be found about the album, even the meandering 13 minute epic ‘All Mourning Long’ with its abyss spawned bedlam that eats away at the senses and throws torment and despair by the moat full at the listener is wonderfully effective despite its testing soundscape and alarmingly hypnotic caustic aural assault.

The album comes in a cd/DVD package with an included live performance that corrupts as it engages and shows the band as dominant and irresistible on stage as they are aurally from the studio, and why The New Jacobin Club has graced shared stages with the likes of KMFDM, Nashville Pussy, Groovie Ghoulies, Voltaire and Discover Channel’s Guinea Pig show. Eventful, dramatic and most of all wonderful, everyone should have one.