False Idols And Pyrite Thrones from UK thrash metalers KaiDekA may not come with the keenest of originality or the ammunition to forge new directions but it is definitely a release that inspires an eager moshing allegiance from limbs and heart. Rough, raw and aggressive the album proudly uses its thrash and metal influences in a strong union with their own inventiveness to create their self titled nu thrash, the emerging sound a fusion of the likes of Testament, Mudvayne, and Killswith Engage with slithers of Dry Kill Logic/Lamb Of God. Though not overly original the music from KaiDekA is thoroughly satisfying and intriguing and the album very easy to keep revisiting with eagerness.

The quintet from Cornwall formed four years ago building a strong and respected reputation in the UK underground metal scene through their explosive and impressive live shows. Despite many line-up changes over those years the band have steadily been on an upward climb which has seen them linking up with Rising Records and the exiting False Idols And Pyrite Thrones. Renowned hard workers with over 200 gigs to this point in time the release of their debut will surely elevate them even further up UK metal’s rungs and into a wider deserved recognition. 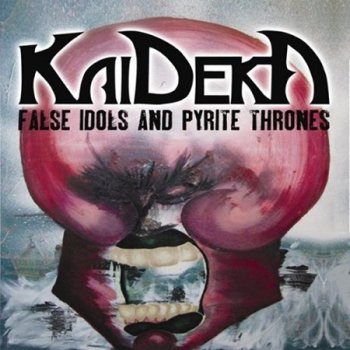 The excellent ‘Placebos Devine’ opens the album with crushing riffs and intimidating rhythms veined by an honest groove that reminded a little of the likes of Primer 55. Vocalist Dax Partridge growls and spits out lyrics with a deliberate belligerence that sits perfectly within the aggressive sound. Further smooth vocals from Jamie Gill bring a good contrast to the gruff attack and his threatening drums which are almost hypnotic, and with incisive and intelligent guitar work  plus impressively excellent bass lines from Tom Healan the band show immediately they are one mean skilled metal machine.

The album is strongly consistent though some tracks leap out to invite and engage the senses more than others but there is not a weakness across the ten song album that ever makes the experience less than completely enjoyable. The enthused ‘Lets Blame Dahmer’ a prime example as it pounds its way in next with frantic vocals from Partridge sounding Chad Gray like. Cutting urgent riffs and scorching guitars litter the song to wake up the senses even more and get the head and body mobilised in eager nodding.

A slight dip follows though that is more from the couple of songs being sandwiched between a very strong opening to the album and three red hot tracks that sit midway through the release. The first of this trio of dynamic tracks is ‘Drowning’, a song of penetrating energy and striking black intent. Varied and well written the track brings elements of thrash, deathcore and metal in a smooth mix that shows UK metal has some intriguing and firm hands emerging to take it forward, as also in bands like Puritan Slain who KaiDekA remind of at times here. ‘Pride’ and ‘Slave‘ join the song to make a gripping centre to the album, the first a threatening powerful beast that is not as instant on the ear but proof of the creativity within the band and the latter a predatory prowling monstrosity that taunts and punishes the senses with venomous instinctive and skilled brutality.

False Idols And Pyrite Throne is not without its faults like a production that is not crisp enough to stop at times some aspects merging and being muddied within the wall of intensity. Also there are moments where the band bring too much variety into a track to leave it slightly disjointed but to be honest the album is that pleasing and overall deeply satisfying that they do not really become a major  issue. The album will not make your top ten of the year but it will certainly bring definite pleasure from a band in KaiDekA that is still emerging to find its own unique sound. With the base and skill shown within False Idols And Pyrite Throne UK thrash and metal has a bright and punishing future.