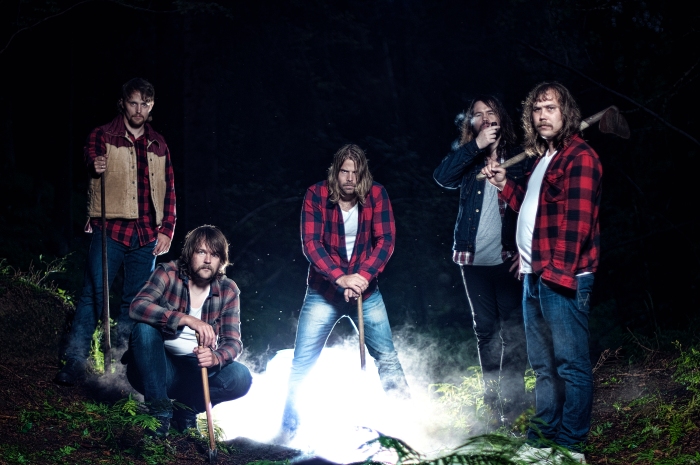 Norwegian rockers Svölk is a band with a strength and intensity to their fusion of classic and hard rock melded with stoner and southern rock ‘n’ roll that makes it impossible not to be swept up in their music’s burly arms. Recently signed to Napalm Records the band have just re-released their debut album of 2009 Svölk ‘Em All to punch their immense sounds into a bigger and wider spread of new and eager ears.  We had the pleasure to ask Martin Østerhaug and Jengt Castral from Svolk about the album, the band and their ‘bear metal’.

Hi, welcome and thanks for talking with The RingMaster Review.

Would you be kind enough to first introduce the members of Svölk?

Coming from a country known for its black and death metal how did you find initial response to your varied rock sound, or as you term it ‘bear metal’?

Martin:  I think Norwegians are more and more getting fed up with black metal. We are trying to do something new, and yet more classic hard rock/metal. And people really seems to love it.

I have to ask, why the label of ‘bear metal’? It cannot be just down to the beards? Haha

Jengt:  It started as a joke. We wanted a logo and found a designer on the web. I did this logo that looked really bad with a Flying V, an explorer and the Svölk logo.  Then the designer dude took it to another level and came up with the idea of a lion in the middle. We felt that we had nothing to do with lions, but since we grew up in Trysil (except Jørgen (Odalen) and Halstein (Kvinesdal)), we decided to go for bears. Trysil is famous for deep forests, skiing and bears. And from there on everything was bears, beers and beards.

What were the strongest influences that inspired your own musical style?

You have just had your debut album Svölk ‘Em All re-released through Napalm Records, apart from the obvious wider push into the world they can give what other advantages have you found in signing with them?

Martin: Actually more fame in Norway also. The only way to make it big in Norway, is to have success abroad, especially England.  It’s also easier to get better and better paid gigs being signed by such a grand label.

As mentioned the album is a re-release of your 2009 debut, why the decision to take it out to a wider audience over hitting them first with an all new collection of songs?

Martin: We felt, and likewise our reviewers, that this album was so good, it would be a mortal sin not to release it outside of Norway.  But have no fears. New songs are written and a new album will be released in the summer.

Svölk ‘Em All also includes three new tracks to the original ones on the album. Can you tell us about them and are they new new ones or songs from around the same time as the original release?

Martin: The bonus tracks are from our Beast Unleashed EP recorded back in 2005. We tried to get someone to distribute it, but had no luck. So I guess it’s our No Life ’til Leather, or something like that.

Is there a new album on the immediate horizon?

Martin: Yes, we are recording it this winter and it will be released early summer 2012

How have you as a band and your songs evolved from those first recordings for the album and your earlier demo Beast Unleashed and the songs you are writing now?

Martin: I think we are more open than before. No more rules. Also we work more with the groove.

What inspires your lyrics to the greatest extent?

Knut Erik:  I find inspiration in the more darker sides of life and the world we live in. Actually I have tried to write more “optimistic” lyrics, but it just feels wrong. Lyrics about fear, death and desperation just seems to fit our music better.

How are you promoting the release of Svölk ‘Em All over the months ahead?

Martin: We do interviews, but part from that Napalm Records is doing all the promoting work for us

You have grabbed great acclaim in Sweden/Norway with the releases and live shows, and stirred up senses further afield with your tour alongside Annihilator around Europe last year. Where do you see outside of your homeland the place ripest for your no holds barred sounds?

We’ve got lots of great feedback from all over the world, and fantastic response on every gig on our euro tour, so my guess is as good as yours. I really hope UK, ’cause we all loved it there on the Annihilator tour. Great country. (We only saw  metal clubs and fans of the UK, though).

Obviously your link up with Napalm opens more things up for the band but to this point how hard has it been for you as an independent band to move forward or even survive?

Martin: It’s been really hard to get good promotion, but with time we got a good name underground and things just opened more and more. Even Jeff Waters snapped us up before we signed any record deal. Hard work, hard focus on quality and a bit of luck really seems to work.

What are you hoping for and planning over the next 12 months for Svölk?

Martin: 6 months with recording and 6 months of doing shows around the world.

Any chance the UK will have the chance to experience some of your impressive live shows?

Martin: Yes. We are working on it. Visit our facebook page or www.svolk.net <http://http://www.svolk.net/> for dates and other news.

Many thanks for taking time to chat with us and good luck with the album. Would you like to leave with words for your fans and those about to discover ‘bear metal’ and the mighty Svölk?