Home › Music › The Static Jacks – Into The Sun/Mercy, Hallelujah

The Static Jacks – Into The Sun/Mercy, Hallelujah 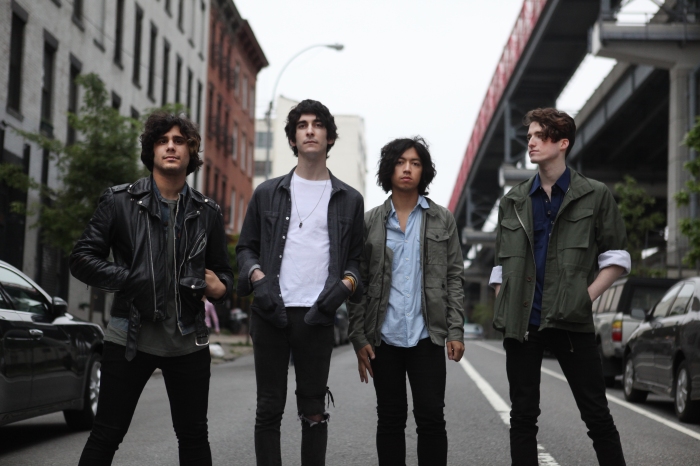 ‘Into The Sun’ is the new single from New Jersey indie rock band The Static Jacks and their debut UK release.  Taken from their forthcoming album If You’re Young on Fearless Records, the release comes out November 28th via Laissez Faire Club to intrigue, entice and pleasure a new flurry of eager ears. The album has already garnered great praise and attention with its release in the US this past August as has the video for the single, now it is time for this side of the big blue to let loose frenzied limbs and warm hearts for the band’s heady and addictive mix of garage rock and indie pop.

The single is actually a double A-side of ‘Into The Sun’ coupled with ‘Mercy Hallelujah’, the two songs an appetising teaser for the album and a vibrant introduction to the band and their hypnotic sounds. The quartet of vocalist Ian Devaney, guitarists Henry Kaye and Michael Sue-Poi, plus drummer Nick Brennan started stirring up hearts with their self-released Laces EP of 2009 and numerous shows and tours with the likes of Futureheads, Biffy Clyro, Young the Giant, and We Were Promised Jetpacks, all the time continuing the garage/punk ethos of DIY self independence. Fusing distinct and memorable sounds they have been influenced by and of their own creation, The Static Jacks has produced an album that is varied and bursting with lively striking songs, something the single clearly suggests and proves.

‘Into The Sun’ swings into action with a Buzzcocks like melodic feel and addictive hook, the song blending incisive melodies and energetic guitars to engage and excite the ear. The vocals of Devaney are emotively strained but wonderfully controlled as he brings forth the smart lyrics. There is a punk urgency to the song that leaps onto the senses to play mischievously as the rhythms and beckoning call of the siren like melodies court the ear. Ok the song is not exactly groundbreaking but there has been a rare few songs this year that have teased and romanced the heart as openly as ‘Into The Sun’.

With matching effect ‘Mercy, Hallelujah’ delivers an equally impassioned and melodic sound, though this time with an Americana flavour to give a different texture. Notably there is also a melody very reminiscent of The Cure, actually one could almost say borrowed as it is very close to that which veins ‘In Between Days’. The Static Jacks to be fair use it in their own strong distinct way turning it into an integral part of a great song. Whereas its sister track bounces around for attention, ‘Mercy, Hallelujah’ has a deeper intensity and feeling to it, a depth that inspires emotions.

Recorded and produced by Chris Shaw (Ted Leo, Bad Brains, Elvis Perkins in Dearland) at Stratosphere Sound in New York City, the single is a joyous duo of rich and exciting sounds and though the songs may not have your jaw dropping in awe at something brand new but they certainly will excite ears and enthuse hearts, as well as make their invitation to check out If You’re Young impossible to refuse.

The band is also giving away a free mp3 of album track ‘Girl Parts’ @ http://shop.laissezfaireclub.com/track/girl-parts.