With a sense of recognition alongside fresh vibrant riffs and melodic insurgency comes the debut album from Irish rock/metal band Xerosun. The quartet from Dublin though founded in 2003 are still relatively unknown to many but with Absence Of Light released via Rising Records one suspects that will surely change as its thrusting and impressive sounds find more eager ears to satisfy.

Consisting of vocalist and bassist Ivan O’Sullivan, guitarists Fiachra Kelly and Gareth Jeffs, and drummer Darrin Bell, Xerosun have unleashed ten tracks that though they admittedly do not break down many doors into unknown musical territories but do eagerly and cleverly utilise influences and touches to enhance their own flavoursome sounds and ideas. The songs are varied and play with a slight Foo Fighters /Sick Puppies taste fused with some Metallica intensity and grunge rock spices, each seemingly playing like an old friend with a glimpse of familiarity and all with a striking and infectious energy.

Since their formation the band has gigged extensively across Ireland and the UK and released two well received EP’s and additional videos to coincide with their appearance. Along the way they have also grabbed the attention and support of the likes of Paradise Lost guitarist Gregor Mackintosh when Xerosun covered his band’s classic track ‘True Belief‘. With a TV appearance in Ireland reaching 500,000 also under their belt things are moving upward for the band something Absence Of Light can only accelerate. 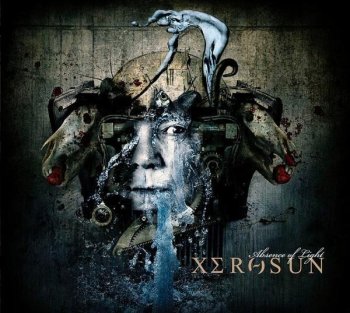 The album opens on a high with ‘Cut Me Down’, the song is an instant pleasure for the senses with the pumping riffs and Hetfield like vocal attack from O’Sullivan an obvious and engaging invitation. The sing-a-long chorus adds to the eager attack and the song is a friend long before it lays down its last note. Though not the most aggressive track on the album it is no less pleasing as can be said about its successor ‘In My Mind’ which though different carries the same rock set up and result.

One of the especially pleasing aspects of songs is the deep basslines and tone again of O’Sullivan. His throbbing and emotive bass a wonderful contrast and compliment to the incisive and robust guitar play from Kelly and Jeffs. ‘Broken’ is an impassioned song rising up off of a dark bass riff toned with a part gothic part grunge almost Pearl Jam like feel. It stands as one of the three stand out songs though all tracks on the album are very agreeable.

‘Long Way Down’ starts on the best gutsy bass sound heard in a long time under pinning the more melodic direction of the song. The song as with all is well written and thought out, having every aspect a good rock song should in abundance except a sting of originality maybe but when it sounds this good it is hard to level that as a major flaw. The album’s best track ‘Silent All’ is the same, not breathing uniqueness but conjuring and delivering aggression and excitement that the majority of releases fail to find.

If you are looking for solid and exciting rock/metal sounds that attach themselves to the ear with eagerness and extremely well presented thrilling hooks, riffs, and melodies look no further than Xerosun. They may still be yet to find their own distinct sound but they still leave most other rock bands standing in their wake.