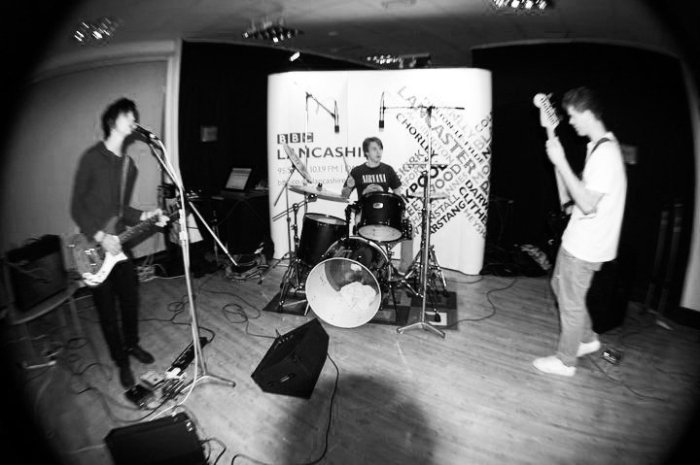 Quite simply the debut release from UK band Effluences is stunning and easily the best single this year. A throbbing and hypnotic living beast from obviously wonderfully warped musical minds the release made up of ‘Catchrag’ aided and abetted by ‘Stilts’, is aural nectar for the bedlam of life, a reason to smile each day.

The band labels their sounds as psycho grunge but really there is not a tag to adequately describe their instinctively raw and chaotic mayhem. It blends the thrills of psychobilly with the discordant dirty delights of garage punk squeezed through psychedelic post punk distorted imagination. Formed in 2009 it is hard to believe the band has not caught the attention well before now but with their debut that is surely about to change.

‘Catchrag’ erupts into an instantaneous pleasuring of the senses with a sweet bulky bassline and crashing guitars all driven by firm beats of rhythmic urgency. The track bristles with attitude and wicked intent, determined to play and tease with riffs that rumble and pounce incessantly. The best way to describe the band is Eighties Matchbox B-Line Disaster meets early The Horrors in a hellish dark corner of the mind of a Cramps/Muse bastard son; yes it is that diverse and wonderful.

Second track ‘Stilts’ compliments and matches up just as impressively. A wanton groove alongside throbbing basslines and schitzo vocals fuelled by a pulsating drum attack this song feels like the devil spawn union of Th’ Legendary Shack Shakers and The Gaa Gaas in an illicit rendezvous with the above offspring. With all these references one still cannot truly get right up close to the sound oozing from the speakers, Effluence is a distinct and inventive beast and very beautifully strange.

Both songs are glorious and Effluence the next big thing from the UK, whether history bears that out one will see as success and acclaim does not always go to the right deserved. For this musical heart the band is the highlight of the year and set firm in the daily playlist at The RingMaster Review.