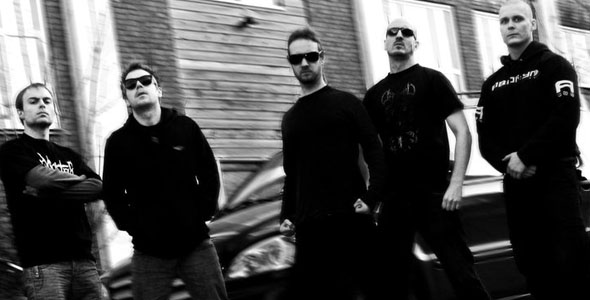 The opening guttural regurgitations of vocalist Anders Bo Rasmussen from Danish band Deus Otiosus that sets up their debut album instils the anticipation of more of the hellish dark pit death metal that has been coming strongly from everywhere this year, black sounds to pummel and destroy senses. An assumption that is totally borne out but Murderer contains so much more, to belie a little their self labelling of being an old school death metal band. They certainly do strike with the essences of and flavours of bands like Deicide, Obituary, and Morbid Angel but infused is an infectious groove and funky grind that is almost at odds with the dark and challenging themes plus plenty of unrelenting thrash energy. As the tracks unleash their striking sounds the revitalising of a genre’s origins with modern engagement and thought is unveiled, making an album that far exceeds expectations and initial visions of its content.

Formed in 2005 Deus Otiosus by Rasmussen and guitarist Henrik Engkjær the band has already made ripples with their 2007 demo Death Lives Again and split release with Hideous Invasion in 2009. Murderer though is a fully loaded dark presence that breaks down the senses whilst teasing and intriguing the inner addiction for siren hooks and inciting melodies. With a line-up completed by bassist Jens Nepper and Søren Bentsen on drums for the release by American Line Productions and FDA Rekotz, Deus Otiosus brutally decimates all sense and feeling with eight tracks of undeniable quality, viciousness and simply impressive music.

The first two songs convince and win over any doubters from their opening assault, both are majestic and even if the rest of the release was as suspect as Lady Gaga’s sexuality which wonderfully it is not, Murderer would have had an uncompromising thumbs up. Opener ‘I Have Seen Him Slay’ is a rampant excitable mosh of rapid fire drums, beckoning riffs and a groove that strokes with perverted intent as the song strips flesh away. It is hard not to smile at the lighter guitars that trip through the release teasing behind the wall of aggression. The song as all subsequent ones do, show the band are skilled and expressive musicians and the guitars especially satisfy every aspect of enjoyment.

‘Thousand Arms of the Dead’ ups the stakes even higher from its impressive predecessor erupting on a Misfits like intro before lining ferocious riffs and intensity from the depths of their black hearts with dazzling guitar detours and bass lines that weaken the knees. The track and the whole album is an angry and blackened attitude fuelled release, its intent verging on the demonic but there is always that intriguing element veining the attack like an aural wink that makes one feel there is s definite mischievous side to the band.

Because of the quality of the first two songs there is a slight drop in levels though the belligerent and thrusting ‘Ye Pigs of Little Faith’ certainly gives them a run for their money. This is not a negative just evidence of the greatness of those songs and as a release Murderer only satisfies deeply. Production at times could have been stronger as at times the distinctiveness of the bass and drums is overwhelmed within the power the band drive with, but apart from that the album is never less than gratifying.

It has taken a fair while for Deus Otiosus to reach this moment and for their music to be heard on a dedicated release but it was worth the wait and the anticipation of what is ahead from the band comes with much more eagerness.